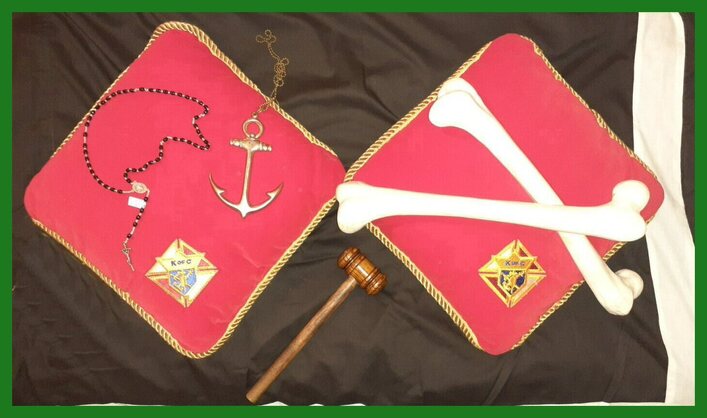 There were four Degrees of membership in the Knights of Columbus until the New Ceremony: Rooted in Past, Tailored for Present.

Each of the four Degrees was designed to correspond and demonstrate one of the four principles of the Order: Charity, Unity, Fraternity and Patriotism.

Each Degree had it's own installation ceremony at which the core principle of the Degree is conferred upon the Knights seeking advancement in their local Council.
1st Degree (Exemplification): Charity was the first core principle
Our Catholic faith teaches us to “Love thy neighbor as thyself.”

Members of the Knights of Columbus show love for their neighbors by conducting food drives and donating the food to local soup kitchens and food pantries, by volunteering at Special Olympics, and by supporting, both spiritually and materially, mothers who choose life for their babies.

Knights recognize that our mission, and our faith in God, compels us to action.

There is no better way to experience love and compassion than by helping those in need, a call we answer every day.
2nd Degree (Admission): Unity was the second core principle
Unity means none of us is as good as all of us.

This principle helps Knights realize their true potential as Christian brothers and the sacred power of unity.

Members of the Knights of Columbus all know that – together – we can accomplish far more than any of us could individually. So we stick together…we support one another. That doesn’t mean that we always agree or that there is never a difference of opinion.

It does mean that – as a Knight of Columbus – you can count on the support and encouragement of your brother Knights as you work to make life better in your parish and community.

Members of the Knights of Columbus are united in the body of Christ, ritualized and embodied in their full participation in the Catholic Church.

Their loyalty to Christ and the unity which He encompasses, is realized through their commitment to one another and their local, regional, and global church.
3rd Degree (Formation): Fraternity was the third core principle
The Knights of Columbus was founded, in large part, to provide assistance to the widows and children left behind when the family breadwinner died – often prematurely.

The Order’s top-rated insurance program continues to do this today, as do individual Knights, who last year gave more than 10 million hours of their time to assist sick and/or disabled members and their families.

In the Knights of Columbus, we watch out for and take care of one another.

Knights that have attained the 3rd degree enjoy privileges that include ability to serve as a local council officer, and admission to state and Supreme Council business meetings.
4th Degree (Knighthood): Patriotism is the fourth core principle
Each ‘degree’ of the Knights of Columbus is associated with a particular virtue, the fourth being “Patriotism”.

Thus the 4th Degree is often known as ‘The Patriotic Degree’.

It was established in New York on 22 February, 1900. The requirements for joining the 4th are that a brother Knight must have been a third degree member in good standing for at least one year, be an exemplary Catholic, and be of sound citizenship of his country.

The Fourth Degree is frequently regarded as an honorary title with it’s regalia of tuxedos, capes, chapeaux and swords but should rather be thought of in terms of service to church and country, and the goals of the Fourth Degree may be summarised as the promotion of the ideals of Catholicism and Patriotism side by side.

In more detail, these goals may be stated as:

Therefore, it is not unusual to find Fourth Degree Knights participating visibly in church events, such as Eucharistic processions, and others, and in the community, standing up for the unborn and the elderly at Pro-Life events, and commemorating the sacrifices of previous generations on Remembrance Day.
Site Map - Click on a Link