The history of the Order shows how the foresight of Father Michael J. McGivney, whose cause for sainthood is being investigated by the Vatican, brought about what has become the world's foremost Catholic fraternal benefit society. The Order has helped families obtain economic security and stability through its life insurance, annuity and long-term care programs, and has contributed time and energy worldwide to service in communities.

The Knights of Columbus has grown from several members in one council to more than 15,100 councils and 1.9 million members throughout the United States, Canada, the Philippines, Mexico, Poland, the Dominican Republic, Puerto Rico, Panama, the Bahamas, the Virgin Islands, Cuba, Guatemala, Guam, Saipan, Lithuania, Ukraine, and South Korea.
​10 THINGS YOU DIDN’T KNOW ABOUT THE FOUNDER OF THE K OF C
3/28/2019
By Andrew Butler
FATHER MICHAEL J. MCGIVNEY IS A TIMELESS WITNESS TO THE FAITH 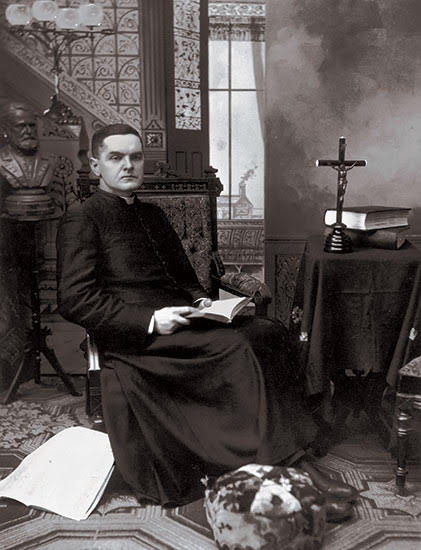 ​Maybe you’re an old pro and already knew that Father Michael J. McGivney founded the Knights of Columbus in New Haven, Conn. in 1882. Maybe you already knew that he envisioned a Catholic order that would help Catholic men to remain steadfast in faith while providing insurance for their families.
But you probably didn’t know these facts:
1. Not only Catholics, but even Protestants were inspired by Father McGivney’s witness of faith.
Alida Harwood, the daughter of a prominent Episcopal minister in New Haven, frequented Mass at St. Mary’s Church where Father McGivney served. When Alida contracted malaria at the age of 25 and lay on her death bed, it was Father McGivney that she asked to see.
2. He was a heck of a baseball player.
We know that in one game with his seminary team he scored three runs, contributing to a big victory with a score of 23-6. He paved the way for a long history of baseball players who would join the Knights, including these MLB legends.
3. More forward-thinking than Yale? Father McGivney pushed the boundaries as a theater director.
At a time when, according to Parish Priest, nearby Yale University was limiting theater to only male actors, Father McGivney welcomed women to perform when he directed his parish’s St. Patrick’s Day play in 1880.
4. He helped young people take charge of their lives and create a better future.
Father McGivney saw that many young men were neglecting their religion and turning to alcohol abuse. In response, he founded St. Joseph’s Total Abstinence and Literary Society, a group that helped young men stay strong in the faith and become active in their communities. They organized and participated in sports and theatrical productions. McGivney offered members a meeting space with books, magazines, newspapers and a piano. No doubt, Father McGivney’s experience with this group prepared him when he later founded the Knights of Columbus.
5. His vision for the role of the laity was very unusual for the time.
Seventy-seven years ahead of the Second Vatican Council, the idea that a Catholic organization could be led by laymen was quite extraordinary. Yet that was Father McGivney’s vision for the Knights of Columbus.
6. He ministered to inmates.
Father McGivney was responsible for ministering to inmates in the city jail. One inmate was 21-year-old Chip Smith, who — while drunk — shot and killed a police officer. Smith was convicted for first-degree murder and sentenced to be hanged.
Father McGivney visited him daily, and, on the day of Smith’s execution, the priest was filled with sorrow. Just before he died, Smith comforted him: "Father, your saintly ministrations have enabled me to meet death without a tremor. Do not fear for me, I must not break down now."
7. He was only 38 years old when he died.
And that’s actually not surprising — life expectancy was short for priests in Connecticut in the 19th century, when the Catholic population was growing, disease was common and the priests were overworked.
8. He’s on the path to sainthood.
His cause for canonization is open, and he was given the title “Venerable Servant of God” by the Holy See in 2008. You can help promote devotion to this Servant of God — click here to join the Father McGivney Guild.
9. His belongings were burned when he died.
When Father McGivney died of tuberculosis, his personal items were burned to prevent the spreading of the disease. Only a small number of his writings and belongings survived.
10. He is known to intercede especially in four areas (from Columbia magazine):
•Employment and finances. Just as parishioners looked to Father McGivney for help when “No Irish need apply” was often included in job postings, so today many receive help when they are laid off or seeking a better job.
•Substance abuse. In Father McGivney’s day, alcoholism afflicted the immigrant population, and many now find relief from drug or alcohol abuse after praying to him.
•Family reconciliation. Father McGivney helped immigrant families struggling to stay together and to make ends meet. Today, Father McGivney continues to respond to the prayers of families.
•Return to the faith. Father McGivney founded the Order to keep men from joining anti-Catholic societies. Today, many Catholics receive favors when calling upon him to help their fallen-away children return to Mass.
Site Map - Click on a Link